What are my Chances of Passing the Quebec Bar? Part 1: Total Pass Rate and Law School

In this era of daily statistic counts, let’s take a look at the stats for passing the Quebec Bar. Every year, the Barreau du Quebec releases statistics for that year. Digging through the internet, I managed to find the official statistics for the last nine cycles going back to 2010-2011 and I compiled them (might as well put all those statistics classes to use). Now we can get a bird’s eye view of how the pass rate has evolved over time and the impact of other factors. And regarding statistics, a big thank you as this site just reached 100,000 page views.

First off, let’s look at how the overall pass rate (factoring in the retake) has changed over the past nine cycles:

Total Pass Rate (after the Retake)

As we can see, the pass rate has hovered around 80% over these nine cycles, 80.90% being the precise average. At first glance, this would appear to be quite high, but breaking this down, it means that nearly one out of every five students who writes the Quebec Bar after obtaining a law degree does not pass the Quebec Bar. And this after writing the retake. In addition, we can see how the pass rate has trended down over the last two cycles. Last year, the 2018-2019 cycle, was actually the worst year of those analyzed.

Now for the kicker, what effect does your law school have on your pass rate? 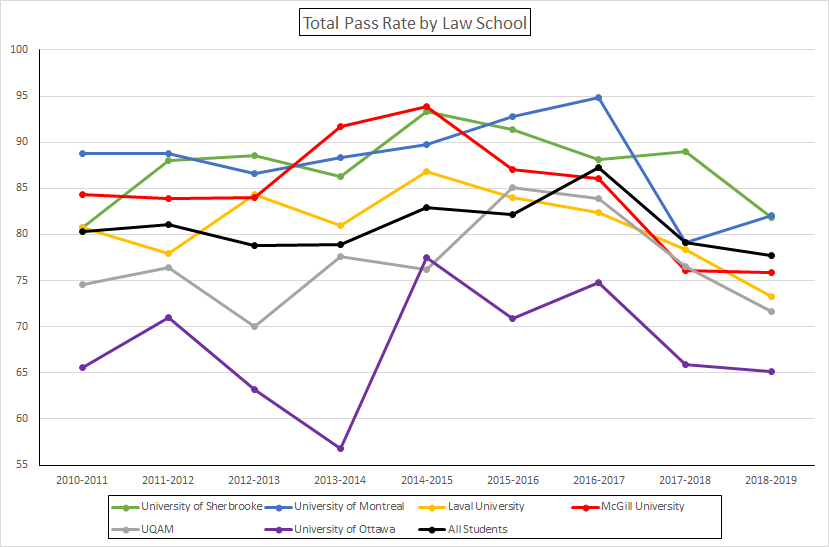 Total Pass Rate (after the Retake) by Law School

We see the university attended does have a noticeable impact on your chances of passing the Quebec Bar. University of Montreal and University of Sherbrooke generally trade the top spot, but McGill is not to be forgotten, as it sometimes steals the podium (albeit not for the last couple of years). On other hand, we see that University of Ottawa has consistently finished at the bottom (except one year where it finished second to last). However, it should be mentioned that there are no statistics for the student ranking (R1 to R4) breakdown for each university and it would be false to state that these rankings are equally distributed across each of the different universities. Ultimately, Bar statistics are only one way to rank different law schools and in and of themselves are not enough to determine which university is best.

Now, don’t let these statistics frighten you. Hard work and study ultimately are the determining factors in whether you you pass the Bar. And the reality is that independent of your law school, you need to study. As will be seen in Part 2, your student ranking has a significant impact on your chances of passing and it should guide you in determining whether or not you should sign up for preparatory classes. Part 3 will delve into the statistics for the retake and will show that the pass rate after the first sitting is quite low, but that most of those who rewrite ultimately pass.

I made this website to provide others with what I would have loved to have been told before writing the Quebec and Ontario Bar Exams, as well as some favourite supplies I’ve come to depend on along the way. Viewed more than 400,000 times.