What are my Chances of Passing the Quebec Bar? Part 2: Preparatory Classes and Student Ranking 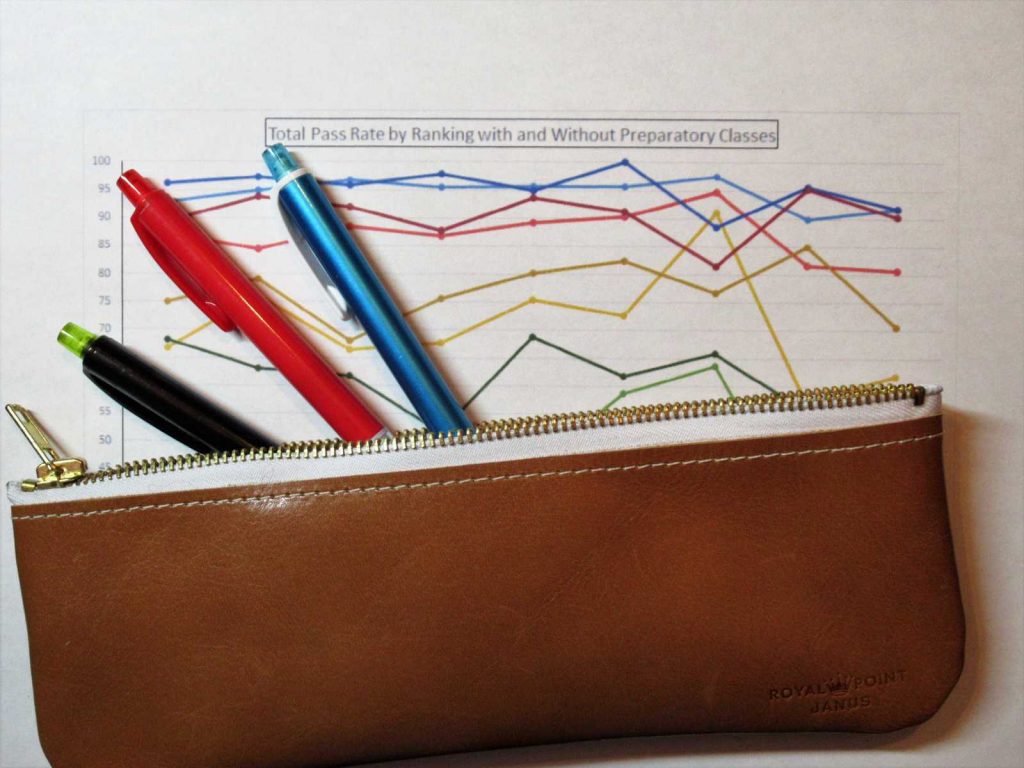 In Part 1 of the statistics posts, we saw how the Quebec Bar pass rate has evolved over time and how different law schools performed. This post seeks to look at the effect of preparatory classes on students’ pass rate and based on their student ranking.

Let’s begin by breaking down the pass rate by those who took preparatory classes and those who did not. It should be mentioned that students who are rewriting the Bar are obliged to take preparatory classes, but I put them in their own category to have the statistics be more informative. 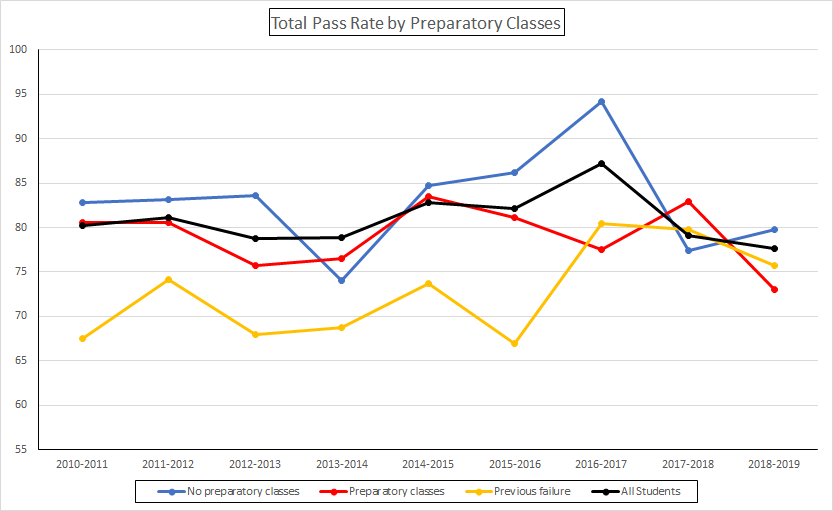 At first glance, taking preparatory classes doesn’t appear to affect the pass rate, rather it appears to actually decrease it. This odd reality can be better explained by breaking the pass rate down by student level. The Quebec Bar has four ranking categories for students: R1 (best), R2, R3, and R4 (worst). It is a little bit of a mystery as to how the Barreau determines each student’s ranking, but it comes up with its determination based on the student’s law school performance and its marks on a short quiz taken upon applying to Bar School. I’ll now separate the total pass rate for each student ranking. The lighter shade is for students who did not sign up for preparatory classes and the darker shade is for students who did. 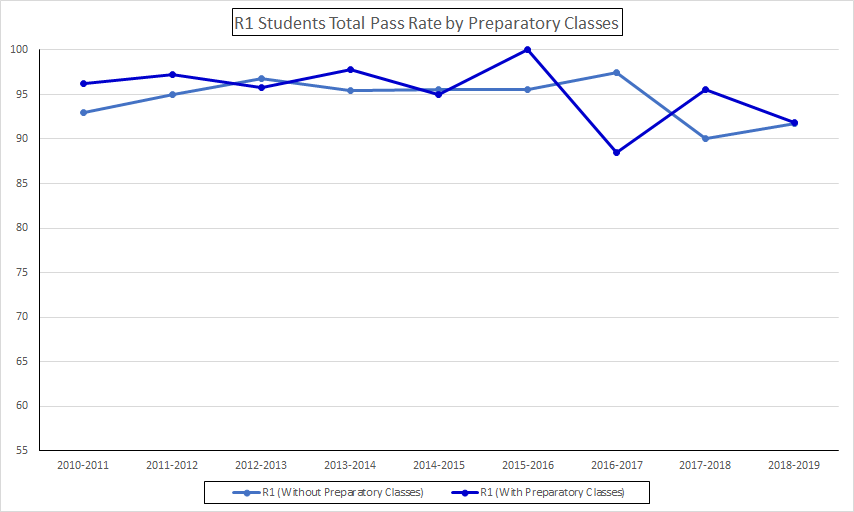 For R1 students, preparatory classes do not appear to have any significant impact on student pass rates. 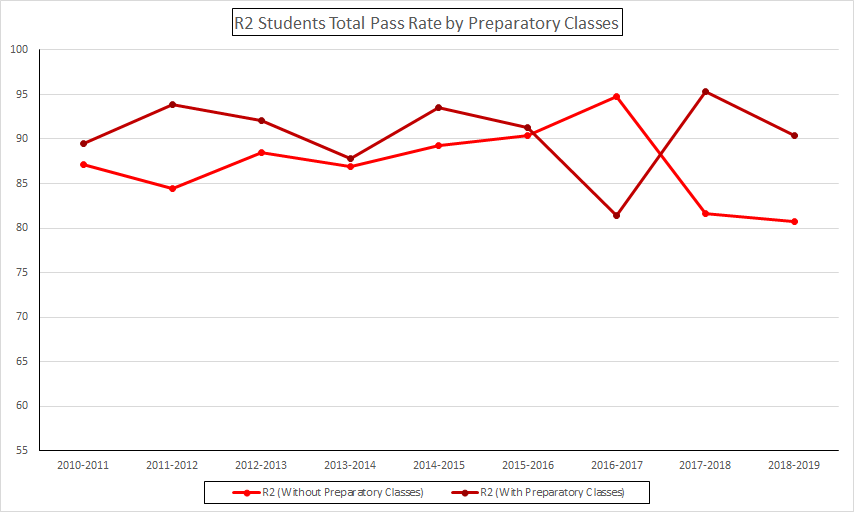 For R2 students, preparatory classes appear to have slight impact on student pass rate, the 2016-2017 cycle being the outlier. 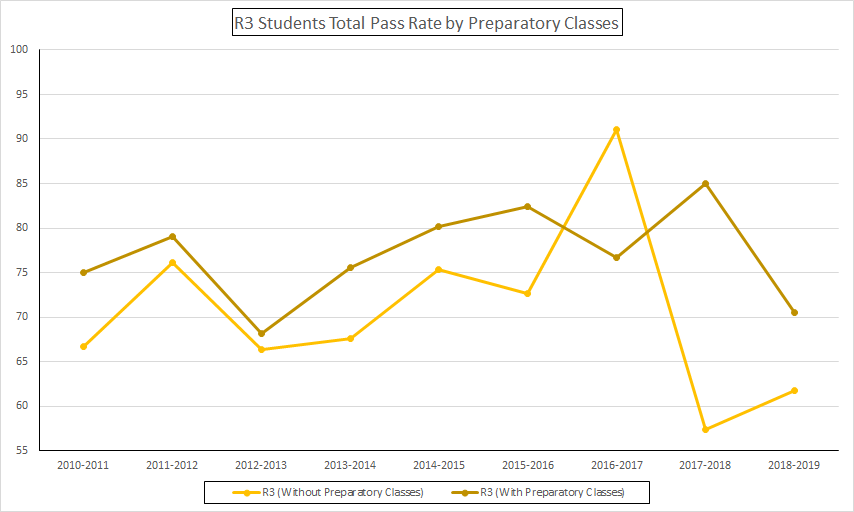 For R3 students, preparatory classes appear to have a more meaningful impact on student pass rate, the 2016-2017 cycle being once again the outlier.

For R4 students, preparatory classes appear to have a significant impact on student pass rates and would accordingly be highly recommended for any student with a R4 ranking.

Now combing these four charts together, we can compare the effect that preparatory classes have on the pass rates for each ranking level. 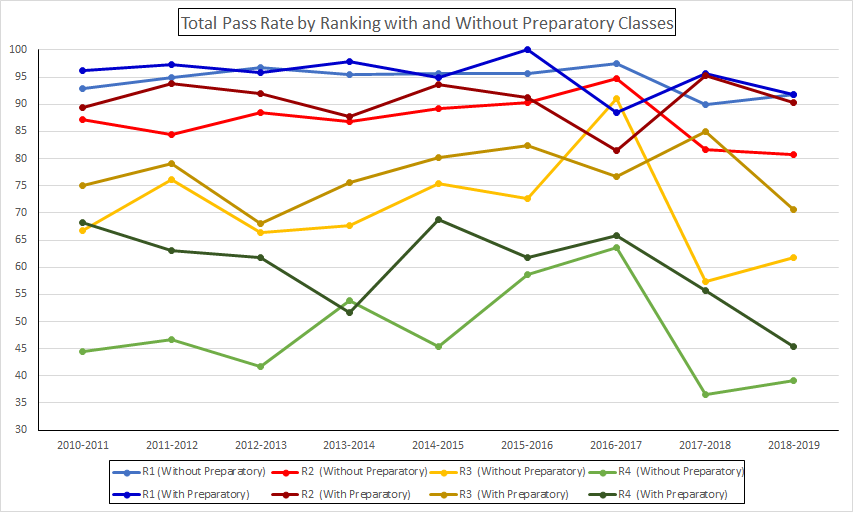 One last point, you might have noticed in Part 1 that the pass rate was much higher in the 2016-2017 cycle (87.23%) than any of the other cycles. We now likely have the answer, the fall exam or at a minimum the fall retake must have been substantially easier than the winter exam. On the other hand, the opposite appears to have occurred in the 2017-2018 cycle, where the winter exam appears to have been substantially easier than the fall exam. How do I come to such a conclusion? This is based on the substantial gap which emerges between those who took preparatory classes and those who did not. The likely explanation is that the difficulty level of the exam during the fall semester (no preparatory classes) must have been substantially different from that of the winter semester (most students take preparatory classes). Anecdotally, I often hear that the winter exam is generally easier than the fall exam. It’s hard to really know for certain and the statistics are not too informative on that front.

In Part 3, we will look at the pass rates before and after the retake.

Sharpened was created to provide others with what I would have loved to have been told before writing the Quebec and Ontario Bar Exams, as well as some favourite supplies I’ve come to depend on along the way. Viewed more than 450,000 times.